Before the Berlin wall fell. Hungary, Czechoslovakia and Poland towards the Refugees from the East Germany in 1989 (Zanim upadł mur berliński wersja angielska)

The scale of the exodus of citizens from the communist Germany to the West, although it happened from the moment the Soviet Occupation Zone began to function and the GDR became established on its basis in 1949, caused a serious political problem in Central-European states in the summer of 1989. The help offered to East-German refugees in Hungary, Czechoslovakia and Poland was an emanation of solidarity without which there would be no Visegrad Group, no common joining the NATO and the EU.

This publication is the second volume of the “Visegrad Library” series in which we attempt to familiarize the readers with problems from the recent past, common to Central Europe, as well as with political and social ideas and undertakings. Its goal is also to build a common environment in the field of science and culture. 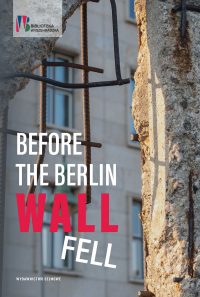