Protesting against the aggression of the Warsaw Pact forces in Czechoslovakia in 1968, “living torches” went aflame not only in Czechoslovakia, where Jan Palach and Jan Zajíc performed the dramatic act of self-immolation. Among those who made the ultimate sacrifice were Ryszard Siwiec, the lone defender of the Poles’ honor, who became the symbol of Polish-Czechoslovak solidarity, and two Hungarians, Sándor Bauer from Budapest and Márton Moyses residing in Romania, who paved the way for Hungarian-Czechoslovakian idea of solidarity.On the 50th anniversary of the invasion, let those Central-European “human torches” remind the contemporary about the solidary roots of the struggle waged by the nations of our part of Europe: a struggle for independence and sovereignty.

Foreword
Jan Draus, Maciej Szymanowski, The aggression of the Warsaw Pact troops on Czechoslovakia from the perspective of half of a century
1. The tragedy of the Prague Spring of 1968
2. “Human torches
3. Memory
4. “Human torches” in the years 1968–1970—chronology
Petr Blažek, Jan Palach and Jan Zajíc
1. Self-immolation as a form of protest
2. Czechoslovak torch No. 1
3. Palach’s followers
4. Memory symbols
Jan Draus, Ryszard Siwiec
1. Childhood and youth
2. Family and patriotism
3. The lone defender of the Poles’ honor in the act of self-immolation
4. Life of Ryszard Siwiec’s family after his dramatic death
5. Restoring the memory of Ryszard Siwiec
Zoltán Nagymihály, Sándor Bauer
1. The ‘68 events in Hungary
2. Childhood and youth
3. Our Czech brother did the same
4. Youthful enthusiasm and political awareness
5. Bauer’s followers
6. Memory guards
Levente Benkő, Tamás Lönhárt, In memoriam of Márton Moyses
1. Childhood and youth
2. First symptoms of “thaws”
3. To help the Hungarian brothers
4. Under the watchful eye of Securitate
5. The verdict
6. Regained freedom—efforts to return to normality
7. I do not want to live in such a state
Resumé
Összefoglalás 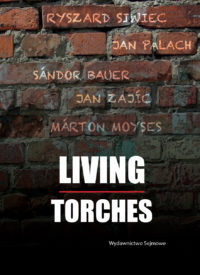